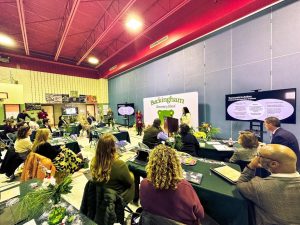 That was the most common request on Dec. 6 as representatives from each of Worcester County’s public schools made their requests to the board of education for the FY24.

The hour-long, in-person and live-streamed meeting began with an introduction from each member of the board, Superintendent Lou Taylor and Chief Financial Officer Vince Tolbert, the latter of whom broke down where the county stands with its funding as it heads into the next calendar year and, next spring, the next fiscal year.

“This year’s budget totals $123.3 million,” Tolbert said. “Worcester County Public Schools continues to be highly dependent on our county commissioners for funding. Almost 75 percent of our funds come from the local government.”

A graphic he presented showed that the state contributes about 16.7 percent and the federal government about 8.49 percent.

For neighboring counties like Dorchester and Somerset, “it’s flipped,” Tolbert said. “They probably get 75 percent of their funding from the state and very little from the county government.”

FY23 expenditures are mostly taken up by three categories: instructional programs at 64.8 percent, special education at 14.5 percent and operation of plant at 10.4 percent.

The unrestricted operating budget reflects what Tolbert described as the people-driven nature of a school system’s business model — salaries and fixed charges take up 85.5 percent.

“If we’re looking at making reductions or changes, it’s people,” Tolbert said. “We don’t really have anywhere else to reduce our budget.”

Some concerning numbers Tolbert also reported included a poverty rate that’s four percent above the state average and the wealth per pupil sitting at $6,600, the lowest in the state.

However, the wealth per pupil statistic runs counter to the wealth-based funding formula the State of Maryland uses that identifies Worcester County as the wealthiest in the state in terms of population as compared to the property tax assessable base, which is driven by the high property values and residential base in Ocean City.

Looking toward 2024, Tolbert said the school system will need to increase employee salaries to adhere to the upcoming Maryland Blueprint for Education mandate. Bus contract expenses will increase, too, as will employee health insurance rates.

“This (mandate) will be driving public education in Maryland for the next 10-plus years at an estimated cost of $3.8 billion,” Tolbert reported. “It includes early childhood education, high quality and diverse teachers and leaders, college and career readiness pathways, more resources for all students and governance and accountability.”

And then, of course, there are the various requests of each public school to consider.

Every school wants the county to continue retaining quality teachers and ensuring Worcester County remains an attractive destination for teachers.

“Our teachers are committed to creating great citizens for this future community,” parent Emily Gelman of Showell Elementary School said. “Let’s invest in them and the community by offering a competitive salary to retain and recruit high-quality teachers.”

Buckingham Elementary School parent Kimberly Jackson thanked the board for its support in completing a feasibility study for a new school and asked that construction funding is maintained.

“In the future, it would be great to maintain these additions to continue meeting the needs of our student population,” Jackson said.

Other funding requests included replacing the pavement in front of the school and sidewalk and replacing the tennis courts at Berlin Intermediate School and stage floor repair at Stephen Decatur High School.

Stephen Decatur Middle School asked the board to continue emphasizing a 1:1 ratio of students to technological devices.

Decatur High parent Dr. Tammy Donaway also pointed out how beneficial it would be if there’s any funding left over for classroom materials.

“We all know that our teachers put in that little extra — their own supplies with their own money — and we ask that you maintain the current funding levels for materials of instruction,” Donaway said. “But if there are any funds available, we’d love to see an increase. It’d be beneficial for both the teachers and the students.

“We know that the jobs our children have later in life are going to depend on the available technology. I think Worcester County really got it right implementing the iPads and keeping up with technology in the classroom.”