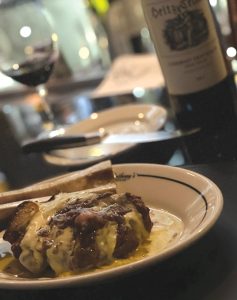 Steak and Bearnaise. Has there ever been a more appropriate pairing? Indeed, yes there has, and I fell in love again last weekend.

A couple weeks ago I made mention of having the privilege of tasting a 21-year-old Chardonnay, and it was magical.

It was stunning, and none of us quite understood what was happening that made this even possible.

It was a 1973 Heitz Chardonnay from Martha’s Vineyard and we tried it in 1994 as a sampling to the servers and cooks at Citronelle from none other than Robert Parker himself.

We were much more fortunate than we gave ourselves credit for back then. We tasted some priceless wines. Were they mere sips?

Absolutely, but it was about as fascinating then as it is now watching researchers figure out how to bend light.

I obviously have never forgotten that story. It was a life-changing event for me and was probably the one moment that pushed me to learn more about wine: much more.

Last weekend, I took a much-needed trip to Atlantic City (yes, I realize that sentence can be utterly confusing and very concerning to many). I needed to get away.

As we had visited the newly remodeled Golden Nugget in Vegas this summer, and the food at Vic & Anthony’s Steakhouse was second to none, I followed suit and stayed at one of AC’s stalwart institutions, the Golden Nugget.

While not as posh as their Vegas counterpart, the room was lovely, they had the same Landry’s Brand restaurants, and they had craps tables.

My first day there, I was sure to get there half an hour before opening and grab a seat at the bar. As I pored through the wine list, my soul leapt from my body when I saw a Heitz Cabernet.

I quickly looked it up and it was highly rated, so I ordered it. It came out, I perused the label and it read ‘Napa Valley’.

This is after I had shared my tale with the bartender and the couple next to me who had joined the conversation.

The bartender said “Oh, that’s the Napa Heitz. The Martha’s Vineyard Heitz is the next one down.”

And while I will not share the price of the Napa Valley Cab – the one I ended up ordering – I can assure you that I was not about to spend $350 on my originally preferred bottle, so I passed.

Still perfectly paired with a bone-in filet with bearnaise and bone marrow (yes, bone marrow), it was an angelic pairing, the tannins cutting through the exceptionally fatty dish.

It was the perfect introduction to my weekend melee.

And my dear friend Atlantic City, you are in my sights again. I’ll see you soon.

*For pasteurizing whole shell eggs, jump into the sous vide game if you’re not already playing.

You can buy an immersion circulator at Aldi on occasion, and they are only about forty bucks! Anova is another good brand, and Chef Steps has a nice one as well, albeit pricier.

— Paul Suplee is the owner of