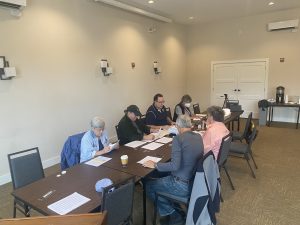 (Oct. 13, 2022) After an association-alarming slip-up and a month-plus of questions, accusations and all-around turmoil, the entire Ocean Pines Election Committee resigned from their positions on Oct. 5, the OPA announced.

The resignations come a week after the committee recertified the results of the August Board of Directors election — but with 940 fewer votes. Both the association and the committee have been dogged by criticism for how online voting and multi-lot voting were handled and the association leadership’s handling of the situation in the weeks after the election.

News first slipped out from the association last week that several members had resigned, but it soon materialized through a press release that the entire volunteer committee walked away.

“Unfortunately, the board has received resignations from several (sic) members of the Elections Committee,” OPA President Doug Parks said in a statement. “The decision from each committee member to resign was their own decision alone. We are saddened that these volunteers chose to resign their position, as the work they have done and the time they have spent supporting the community has been commendable. The board thanks them for their volunteer spirit and their willingness to step up and serve the association.”

When asked for his reaction to the resignations, Parks said it wasn’t something he felt was necessary for the committee to do.

“I didn’t expect it,” Parks said. “I was sad. One of the things I’ve learned in the many years I’ve been involved in high-level volunteer organizations is you never turn down a volunteer. Volunteers are very precious. The fact that we lost volunteers is upsetting.

“I respect any criteria they used to make their decisions. I certainly didn’t want this to happen and at the very least I was hoping we could move forward and look into (the miscount) a little bit further, but I accept and respect what they did and we just have to move forward.”

Parks wouldn’t commit to a timeline for reestablishing the committee, but said, “obviously, the sooner the better.”

“There are no requirements in our governing documents that say a committee can be without members for ‘X’ amount of time. Certainly, we’re working on getting somebody to fill these positions because the sooner we can get that committee together, the sooner they can continue their work and be prepared for the next election.”

Search Committee chair Tom Piatti said he’s already submitted an application to chair the committee and expects it to be on the agenda for the regular board meeting scheduled for Oct. 22.

Piatti is a former Elections Committee appointee. While he doesn’t want to make assumptions about who and how the board votes on applicants, he said he’s given much thought to how the committee has been run in recent years.

“(We’ve had) two years covid, delays in postage and the Elections Committee thought they could improve that with internet voting and it didn’t seem to work out that bad (all things considered),” Piatti said. “We just need to get back to the basics.”

If assigned to the committee, he said he’d also like to work more closely with the ballot-counting contractor, Berlin-based ACE Printing and Mailing.