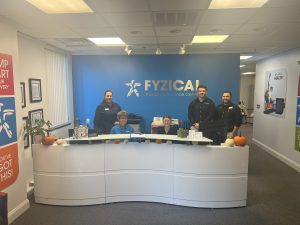 The staff at Fyzical Therapy is excited to tell the community about their new technology, Virtualis, which brings physical therapy into the world of virtual reality. It’s especially affective in the treatment of Parkinson’s disease, a degenerative neurological disorder that is prevalent on the lower Eastern Shore, Fyzical’s Ed Weeks said.
COURTESY PHOTO

(Oct. 13, 2022) Virtual reality, once upon a time a far-off and futuristic concept, can now augment real life in a variety of ways — video games, mobile games, live entertainment and even just hanging out with friends.

Over in Ocean Pines, Fyzical Therapy and Balance Centers are using virtual reality in the form of Virtualis VR to treat all sorts of patients.

“It’s been a real game changer,” said Ed Weeks, Fyzical’s director of sales and marketing. “It’s changing the rehab scope. It allows us to put people in different situations (that benefit their recovery).”

Weeks said Fyzical uses Virtualis — a product offered by French developers — to enhance many therapeutic methods, including physical therapy for limbs and cervical, thoracic and spinal issues. It can be used to improve balance and motion sickness and for various neurological ailments. Those recovering from concussions and strokes can benefit too.

“This is something you typically see only at university medical centers or major hospital facilities,” Weeks said. “We can utilize it to treat just about every issue that we might encounter.”

The proof of success is in the clientele, which Weeks said come from as far as two hours away.

On the lower Eastern Shore, Virtualis is especially useful in treatment for those suffering from Parkinson’s disease. According to Weeks, this area has one of the highest rates of the degenerative disorder per capita in the United States.

“At one point, it was (around) nine percent higher (than the national average),” Weeks said. “Virtualis can pretty much deal with any patient dealing with … any type of neurological issues.”

Fyzical, located at 11204 Racetrack Road, has been in business for 11 years. It started as Apex Physical Therapy, but over the years owner Scott Gardner wanted his business to be more connected in the physical therapy community, Weeks said, leading to the decision to franchise with the Florida-based Fyzical.

“(With Fyzical), we can talk to other practitioners about various patients and health issues, which doesn’t occur around here (with other physical therapy practices),” Weeks said. “It’s very strange.”

For more information about Fyzical Therapy and Balance Centers or Virtualis VR, call 410-208-1525 or visit https://www.fyzical.com/ocean-pines-md.