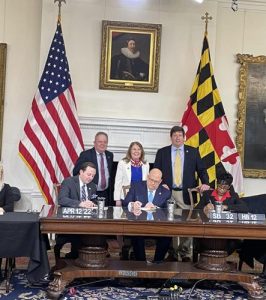 (Oct. 6, 2022) When the calendar turns to October, many new laws go into effect in Maryland. Del. Wayne Hartman and Sen. Mary Beth Carozza talked with Bayside Gazette about the laws — both good and bad — that they have their eyes on.

Hartman started with a trio of bills that affect condominiums and homeowners associations — especially smaller ones in Worcester County. The first — titled Cooperative Housing Corporations, Condominiums, and Homeowners Associations — requires those entities to have a professional engineer at their disposal to evaluate the life and replacement costs of community elements and amenities such as pools, signage, roofs or whatever else for which they are responsible. The evaluations are to occur every five years.

“That’s going to have a huge impact on condo fees and such depending on the outcome,” Hartman said.

Hartman did not support the bill, though he said that the “intent was good.” His chief concern is the smaller associations whom the bill could impact greater.

“I have concerns over the mandated cost of the evaluation,” he said. “The number of qualified people to make those assessments, some associations may have the right number of properties to qualify but simply need a sign (and no other improvements or additions). That’s an overburdened regulation to me.”

Another bill, HB40, prohibits homeowners associations from entering into nondisclosure agreements, something that Hartman described as a “small bill.”

The last, HB615, sets guidelines for how a homeowners association settles a dispute with an alleged violator under the Maryland Condominium Act.

Moving on from private to public properties, Hartman hailed the passage of HB1300, the Beach Erosion Control District which allows the Ocean City Life-Saving Station Museum to carry out much-needed renovations and additions without exposing nearby property owners to other risks.

“A lot of locals weighed in on this and it affected the outcome of that bill,” Hartman said.

The bill addresses previous restrictions on all renovations or additions on ocean-side properties in downtown Ocean City. It allows the museum to do what it needs to do while continuing to bar other properties from undergoing any construction that could affect the view from nearby properties, and thus their property value.

“There was a lot of back and forth between the needs of Ocean City and the concerns of the property owners and what I think came out of that was a great piece of legislation,” Hartman said.

Hartman wants local watermen to be aware of another bill he supports, the Maryland Watermen’s Microloan Program, which gives career and beginning watermen alike a loan from $7,000 up to $15,000.

“It’s a small loan to help them get started or for if a longtime waterman needs help,” he said. “I think it’s important they know about that availability.”

Another bill prohibits the government from charging for the death certificate for a first responder killed in the line of duty.

“(This could) increase public safety and save lives in Worcester County, given the number of special events featuring motor vehicles and motorcycles in Ocean City and the (Eastern) Shore region,” Carozza said in an email. “With Gov. Hogan declaring October as Move Over Awareness Month and with the Endless Summer Cruisers in Ocean City this week, the new law is another public safety tool that can help protect both residents and visitors alike on our local roads and throughout Maryland.”

Carozza added that in 2020, the Maryland Department of Transportation recorded 10 pedestrian fatalities on roadways due to disabled vehicles.

“The new law will help reach the goal of zero roadway fatalities in Maryland,” she said.