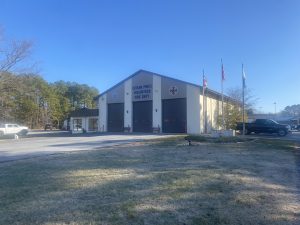 Ocean Pines is in talks with a local fundraiser whom they hope will be able to spearhead the campaign to either renovate or rebuild the Ocean Pines Volunteer Fire Department’s South Station.
JACK CHAVEZ/BAYSIDE GAZETTE

(Dec. 22, 2022) At this time next year, the Ocean Pines Volunteer Fire Department hopes it will be celebrating a successful capital improvement funds campaign for renovating or building a new South Station.

During Saturday’s regular board of directors meeting, and Ocean Pines Association task force charged with evaluating the situation briefed the board on the path they believe lies ahead.

The task force, assembled by Ocean Pines General Manager John Viola and led by former director Ted Moroney, has looked into how the OPVFD and the association should raise the money needed to rebuild or replace the firehouse at 911 Ocean Parkway.

It appears to be settled on donors, fundraising and government grants, according to Maroney.

“Through a lot of work … we were able to arrange several meetings between our team and several experienced fundraising individuals on the Eastern Shore,” Maroney said during the meeting.

“Through those meetings, those individuals were able to validate our approach and (request for proposal), encourage our continued path to pursue additional grants, provide us with the names of many key stakeholders in and around Ocean Pines, expressed a willingness to assist us in doing interviews with RFP respondents and (they could be) supplying ongoing assistance depending on the feasibility results.”

Maroney added that nine requests for fundraising proposals were sent out and six responses were received, ranging in terms of cost from $28,000 to $60,000, not including out-of-pocket expenses.

“Based on research we had done preliminarily, we expected this to be (a) $20,000-plus out-of-pocket expense,” Maroney said.

The task force has identified one “respected” fundraiser who raised “millions of dollars” for the Salisbury Zoo and Delmarva Discovery Museum, Maroney added.

“Our feeling throughout this has been that we need a hybrid campaign with three distinct levels of solicitation,” he said. “After reviewing the proposal, we were convinced that is the correct approach.”

The three-pronged approach, as Maroney put it, would consist of identifying key donors, pursuing the right grants and community fundraising.

Donors are a low-risk, high-reward option, but Maroney said the association will have to be mindful of what grants it can pursue. Though the OPVFD already has about $1.35 million in grant money from the state and has been authorized for about $350,000 in state bonds, the OPA cannot look into grants available to municipalities because of its private status as a homeowners association.

Director Colette Horn asked OPVFD President Dave Van Gasbeck how he sees the impact on existing fundraising. He replied that the fundraising is for apparatus needs and that the OPA and OPVFD have each provided 50 percent of the needed funds for apparatus replacement.

“Our fundraising proportion where we’re selling raffle tickets, et cetera, that’s for apparatus specifically,” he said. “Much of those proceeds come from part-timers and tourists.”

Director Frank Daly asked if a contract had been executed with the fundraiser mentioned earlier,  with Maroney replying that the association’s legal team as well as the fundraiser are looking over a legal document.

“As to the different fundraising prongs,” Daly asked, “does the group have an estimate on how much they can raise or should raise to meet whatever the ultimate goal is?”

Maroney said he doesn’t believe so and that there has been no solicitation or donor preparation like a normal capital campaign would have had by now.

“This is like walking in fresh,” he said. “That’s one of the reasons we were more sold on an Eastern Shore person (as a fundraiser) who is only going to get paid on what they bring in.”

“From a risk standpoint, because we don’t have the history (nor) the analytics you would have if you were at a college, for instance … we don’t know what they can raise through this. With the grants, we’ll have a much better answer in January when we’ve gotten this report back.”