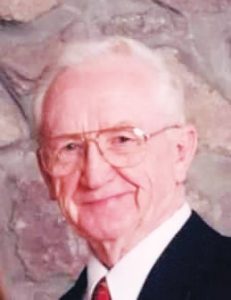 Preceding Mr. Brady in death was his loving wife of 53 years, Eleanor Tylick Brady, along with his brothers, Martin, Francis, William and Robert, and sisters, Mary Brady, Agnes O’Sullivan and Grace Lahiff.

Mr. Brady graduated from St. Peters Prep and Seton Hall University and was an executive in the textile business for 40 years, residing in Silver Spring, Maryland, before retiring to the Eastern Shore in 1991.

Mr. Brady served in World War II, aboard the battleship USS South Dakota, and the Korean War on the carrier, USS Mission Bay.

He was an avid golfer in Ocean Pines and active in community affairs, having served on the Ocean Pines Board of Directors for six years, as president for three years, along with serving as a member of the Worcester County Water and Waste Water Authority.

After the loss of his wife, Eleanor, he moved to Salisbury and became active with Salisbury University, along with volunteering at Hospice and Tidal Health Hospital.